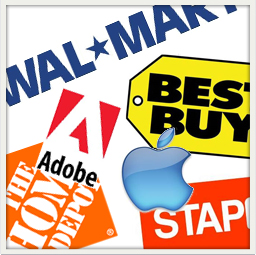 Major retailers struggle to carve out a piece of the online pie.

What do Walmart, Best Buy, Home Depot, and Staples have in common? They are some of the countries’ largest retail chains with tens of thousands of stores. Their brands are recognized globally and they employ millions of people. Also, they are all struggling to get sales online. While these giants all have websites that get a high percentage of visitors each month, none of them have been able to translate those clicks into sales. Find out more.

Some people may not know this but Adobe and Apple have had a tentative relationship since the days before Illustrator, Photoshop, and Flash. Most recently, Apple’s decision to not include Flash capability in its line of mobile products turned this feud into to an all out assault. It appears Apple has finally won the battle. Adobe has announced a new product that embraces a Flash-less web, and leans toward the emerging HTML 5 web standard.  Find out more.

Who would have thought the Slurpee and the Kindle could make good bed fellows.

Amazon has announced a plan that solves the problem of what to do with your packages when you are not home.  They will soon be partnering with 7-Eleven to use them as a package drop center. Soon you will have to have your packages sent to the same place you pick up your morning coffee. Find out more.

Google +1 may soon be used to rank search results.

Google’s +1 has been a huge success for the company and it may become even more important. Google has plans to re-rank search results based on +1 button clicks. Although an obvious direction for the search giant this move could usher in a new era of search engine marketing that is wholly devoted to social networking. It could also pave the way for a new generation of blackhats that manipulate results. Find out more.