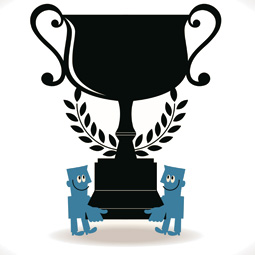 From Milton Glaser to Stefan Sagmeister, the world of modern design owes its existence to these pioneering spirits.

They have shaped the very world of design that lies in front of us.

They have been behind some of the most pivotal graphic design breakthroughs.

Let’s take a look at these six inspiring figures that have left an indelible imprint and continue to have an impact on the world even today.

“There are three responses to a piece of design – yes, no, and WOW! Wow is the one to aim for.”

This very philosophy by the iconic graphic designer and maverick Milton Glaser could make all the difference to your graphic design.

Born in New York, Milton Glaser is best known for the logo ‘I ♥ NY’, one that has a global dominance. This logo is just one of the many remarkable designs that he has created.

From designing brand logos to restaurants, his career speaks volumes about his artistic achievements.

The prolific amount of work that made Glaser’s story such a grand success include the Bob Dylan poster, Brooklyn brewery, Barron’s and various others.

Glaser is also the co-founder of the New York Magazine.

He won the National Design Award Lifetime Achievement from the Cooper-Hewitt National Design Museum. And the film To Inform and Delight: The World of Milton Glaser talks about his celebrated career.

“Interesting things happen when the creative impulse is cultivated with curiosity, freedom and intensity.”

Saul Bass’s work has touched people. He was not only an accomplished graphic designer but also a notable filmmaker.

He designed some of the brilliant logos and film title sequences such as the one for AT&T, United Airlines, Kleenex, Continental Airlines, Psycho and Vertigo.

A versatile designer, Paul Rand was well-known for his corporate logo designs for IBM, UPS, ABC television and Westinghouse.

He was the most influential designers of the 20th century.

“The work needs to get out of your head and on to the table, and it needs to be done from the

One of the most remarkable female graphic designers, Paula Scher is known for her use of bold imagery and eclectic approach to typography. She is a partner in the international design consultancy Pentagram since 1991.

In 2001 she received the prestigious AIGA medal.

“For some reason I have a visual intuition that allows me to design things in an interesting way, and I don’t know where that came from. Because I don’t have this formal training, I seem to drift in a different direction.”

David Carson is called as the ‘Father of Grunge Typography’. He is one of the most notable designers of 1990s. A Carson design has been the basis of the grunge typography era. He is very well-known for his designs for the magazine Ray Gun.

With Carson, it’s his ability to take risks and do something out of the box, that makes his designs so unique.

“Some people said, ‘Oh you’re going to become a fine artist now and do exhibits and stuff.’ But I have no desire to do that. I really like design and I’m going to stay with it.”

A native of Austria, Stefan Sagmeister has designed for diverse clients such as HBO, The Rolling Stones and Lou Reed.

It was only recently when the young designer Jessica Walsh became his partner that his company was named Sagmeister & Walsh.

What sets him apart?

His exquisite attention to details and his way of looking things from a different perspective!

Getting inspired from these heavy weights in the world of graphic design will help you come up with designs that are not only appreciated by the target audience but also help you meet business goals.